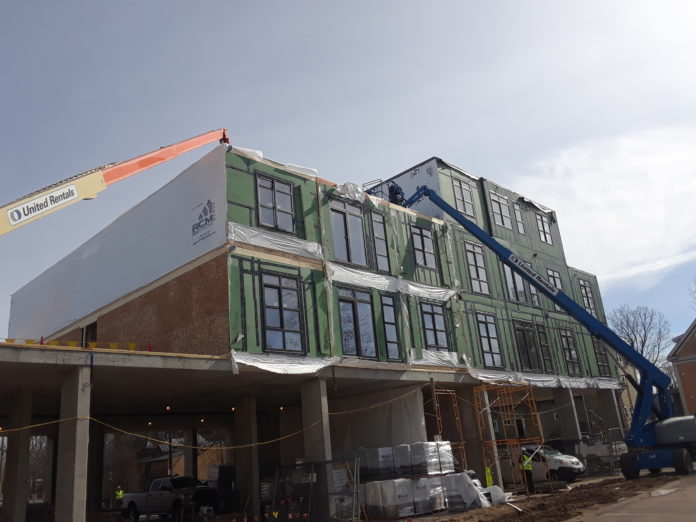 Newton, MA – GreenStaxx’ latest modular building has begun to take shape as the installation of the 102 modular “boxes” that will form the residential portion of 28 Austin Street is well underway.

28 Austin Street is a four-story mixed-use development comprised of 68 one and two-bedroom apartments and 5,000 square feet of ground floor retail located in the village of Newtonville. The project is being developed by Austin Street Partners, a joint venture between GreenStaxx (formerly Oaktree Development), an award-winning developer of transit-oriented, mixed-use, multifamily developments, and Dinosaur Capital Partners, the Boston-based real estate developer and investor. The project will also feature a beautifully landscaped public plaza with trees and plantings, a fountain designed by renowned Newton sculptor Nancy Schon and outdoor seating. Twenty-three of the apartments (1/3 of the total project) have been designated as affordable.

Designed by Stantec, the project is being built using GreenStaxx modular building technology, a patented design system that utilizes a digital library of 25 pre-designed and pre-engineered units that are “stacked” in a 3D program, and are designed and engineered to be assembled like Lego blocks to fit any site. The 65’ long x 13’ wide units were built in a climate-controlled factory in Canada, transported to Newton by flatbed truck, and are now being set in place. The GreenStaxx system, designed by founder Arthur Klipfel, has been utilized in a number of transit-oriented, multifamily projects developed by GreenStaxx, including 30 Haven in Reading, MA, a mixed-use 53-unit complex selected as one of five national finalists for the Urban Land Institute’s Jack Kemp Excellence in Affordable and Workforce Housing Award in 2014.

Austin Street Partners selected Stantec and NEI General Contracting as their development team based in part on their experience with modular construction. “The integral component for the GreenStaxx system is the vertical integration of the developer, architect, general contractor and the modular manufacturer, so that they’re operating as one company, marching to the same drummer, in order to achieve maximum efficiency for a project,” said Klipfel.

Built on a former municipal parking lot in conjunction with the City of Newton, the project will also replace 124 public parking spaces at ground level and add 90 new underground residential and retail employee parking spaces. A rooftop solar array will provide over fifty percent of the building’s electrical needs, and 28 Austin Street will be LEED certifiable, utilizing efficient heating and ventilation systems, fixtures and lighting. Electric car-charging stations are being installed, and all apartments will be equipped with EnergyStar appliances. Resident amenities include a common living room and roof terrace, a fitness center, and a play area for children and dogs. The project is expected to be completed in the summer of 2019. 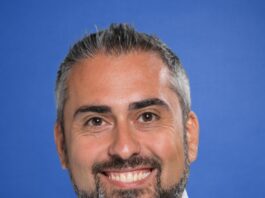 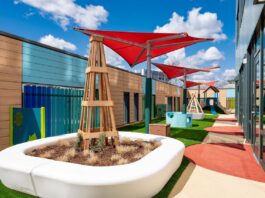 Kaplan Construction and studioMLA Architects Celebrate the Completion of the Edgerley... 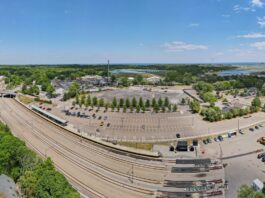